Last year, while on Spring Break and touring colleges with my daughter, a Junior in High School, I upheld a promise I made ten years ago to a starry-eyed 7-year old. The promise I fulfilled was largely due to calming my mind down through yoga and meditation.

Yoga and meditation helped me uphold a promise I made to my young daughter nearly ten years ago.

Although a calm mind helped me uphold a promise I made years ago, it had nothing to do with yoga or meditation type endeavors like being flexible.

The promise was to take a tiny 7-year old to a magical place she found in an advertisement on a sour cream lid. This advertisement graced the plastic lid of a container of sour cream as it sat on our dinner table.

The advertisement wasn’t about Disney.

So, what could be advertised on a sour cream lid that would appeal to a 7-year-old girl who still believes in magic and all things beautiful?

It was an advertisement for a waterfall in Alabama.

My daughter pointed to the lid all those years ago, and she emphatically stated, “We HAVE to go there.”

As our family sat at the dinner table eating potato pancakes with apple sauce and sour cream, we all looked at our starry-eyed 7-year-old, and then to the lid and replied, “OK,” as we continued eating.

A tourism brochure on the town where the waterfall resided appeared in our mailbox a few weeks later.

Our family read the brochure one after another in amazement agreeing that it was a beautiful place.

“We have to go there,” my tiny daughter dreamily again asserted.

“OK,” my husband and I replied.

The brochure was promptly placed on the outside of our refrigerator held in place by tiny magnets.

The years went by, and there was always something more important to do during my daughter’s vacations from school.

Without the ability to calm our minds down from daily life, we were always pulled this way or that. A family member was sick, or dying, or graduating, or getting married, or moving. There was always something that moved us farther away from that promise of going to see my sparkly-eyed daughter’s waterfall.

Not only were there always events getting in the way, there were also self-imposed roadblocks. Isn’t it too long of a drive? Where would we stay? Isn’t that going to be too expensive?

It was easy to say, “Sure, we’ll go.” It was less easy making that actually happen.

We couldn’t settle down and think through the wild card that had been thrown in front of us by a 7-year-old.

Nobody we knew had ever been there.

Besides, who travels over 8 hours to see something their kid found on a sour cream lid?

Really, who does that?

It was far too easy to say OK to our daughter, and then go on to accept other people’s plans for our time or be stopped by our homemade roadblocks.

The years passed, and the brochure was moved from the front of the fridge to the side of the fridge. Then, it found a home in the kitchen junk drawer.

It’s amazing how quickly ten years can pass by while the promise of seeing a waterfall from a sour cream lid advertisement goes unfulfilled.

With a calm mind brought on by meditation and yoga, my husband and I picked up that long ago promise and took our 17-year-old daughter to Little River Canyon National Preserve in Ft. Payne, Alabama.

Without a calm mind, we would have continued making excuses for why we couldn’t fulfill a promise that for years had seemed too complicated.

That’s one of the great things calming down can do for you.

You see, the whole calming down thing through yoga and meditation is not about losing weight or being flexible. It’s about being able to make choices that create a wonderful life for you and those you love.

For this vacation, promised long ago to a small child, we needed a calm mind.

Want to know how the vacation went?

We drove to Alabama from Tallahassee, Florida after going on a college tour for my daughter.

The drive to Ft. Payne was beautiful, long but beautiful taking us through small towns that looked like they were pulled out of a Hallmark channel movie about love and community. We passed rolling lush green hills that brought us to breath-taking mountain roads in Alabama.

We didn’t know what to expect from Ft. Payne, Alabama.

The only thing I could say with certainty was that there would be a hotel off the highway because I pre-booked a room at a Hampton Inn.

The town of Ft. Payne was a lot bigger than I had expected. There was a Cracker Barrel and a Hardees. A Lowes and a Subway also graced the streets along with many shops.

Here’s a fun fact we discovered: Ft. Payne used to be the sock capital of the world.

We checked into the hotel and weren’t expecting it to be so clean. It was also newly renovated. We figured it would be one of those hotels stuck in time and long forgotten like our ten-year old promise, but it wasn’t. In fact, it was one of the nicest hotels of our Spring Break trip.

We slept well, as people often do in a nice, clean hotel high in the mountains. We expected breakfast to be so-so, but there again, it was one of the best breakfasts of our trip. The hotel had spinach and cheese omelets that were very tasty. A little old lady who looked like Aunt Bea from The Andy Griffith Show busily restocked the buffet as we ate in the clean quiet breakfast area.

It was a 15-minute drive to Little River Canyon through rolling hills dotted with beautiful country homes.

The visitor center was large, and the friendly park ranger gave us a tremendous amount of information on where to go, circling the highlights with a pink pen on our park map. She handed my daughter a National Park Ranger badge and a pin before she sent us on our way.

“How did you know this place would be so wonderful just from looking at a sour cream lid?” I asked my daughter who just shrugged her shoulders.

We hiked to the main waterfall. 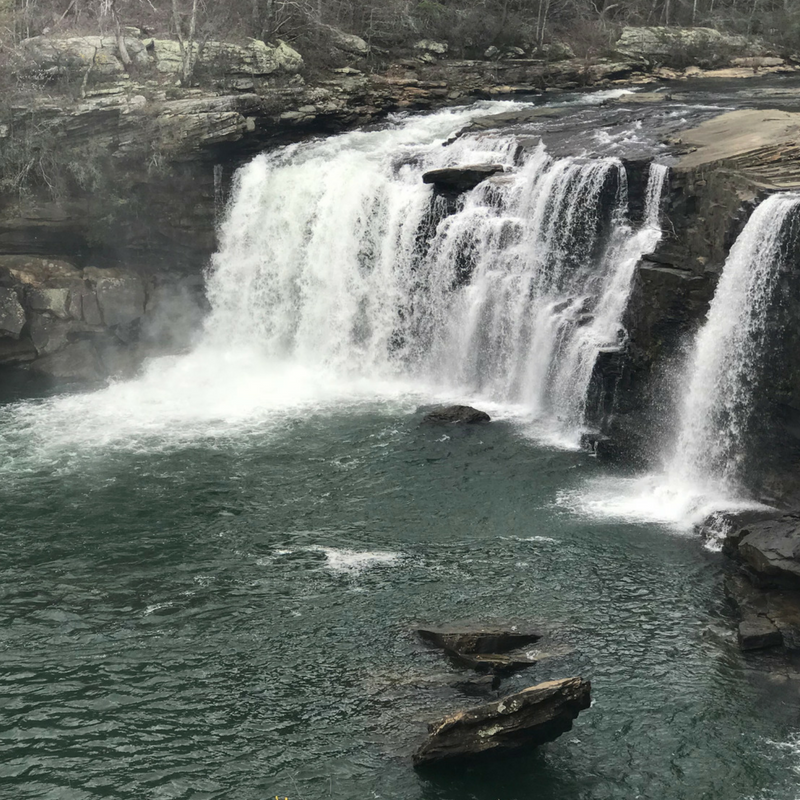 We hiked above the waterfall. 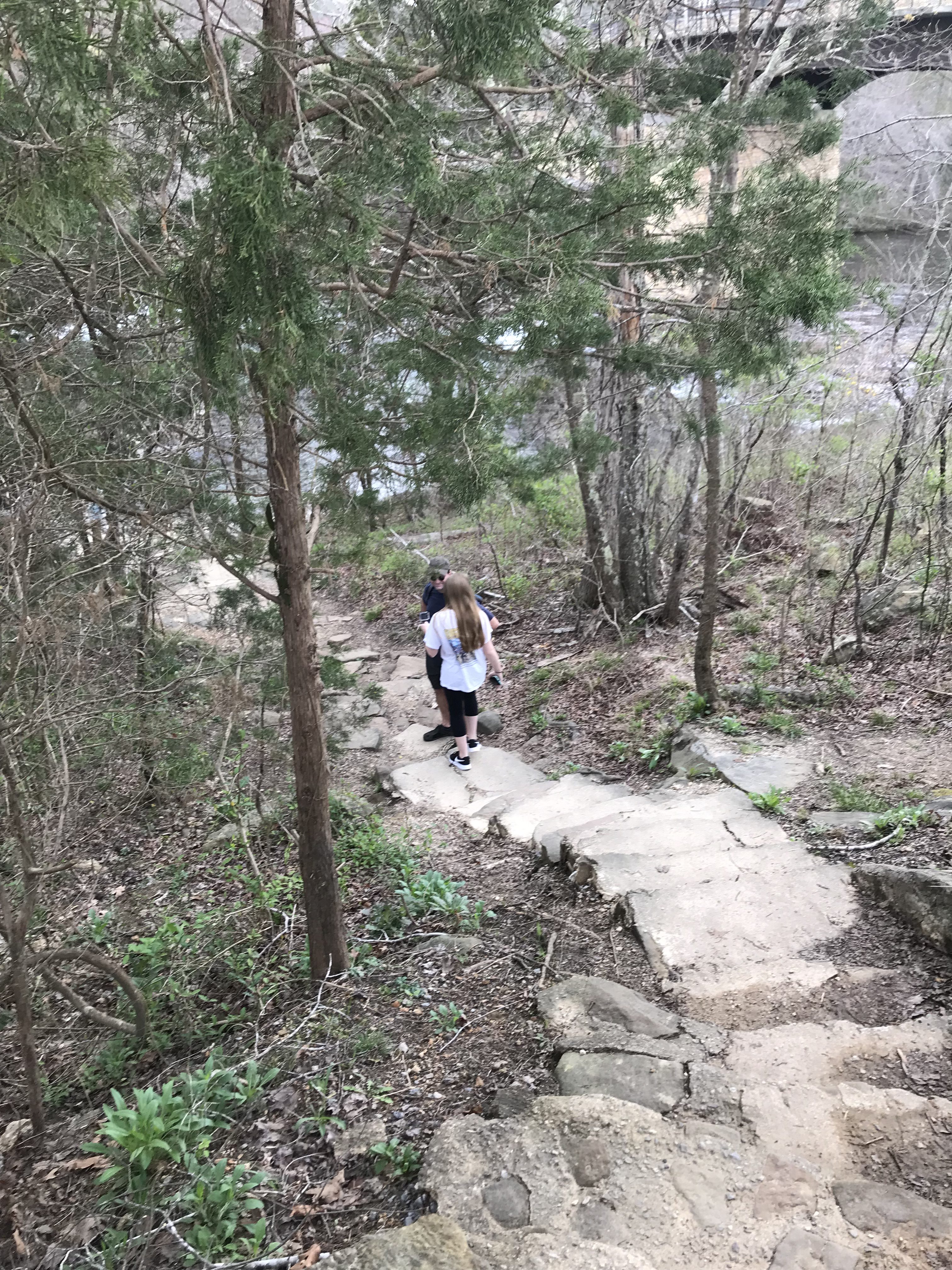 We hiked below the main waterfall and stopped to sit on large rocks beside the waterfalls while we ate sandwiches that we brought with us. 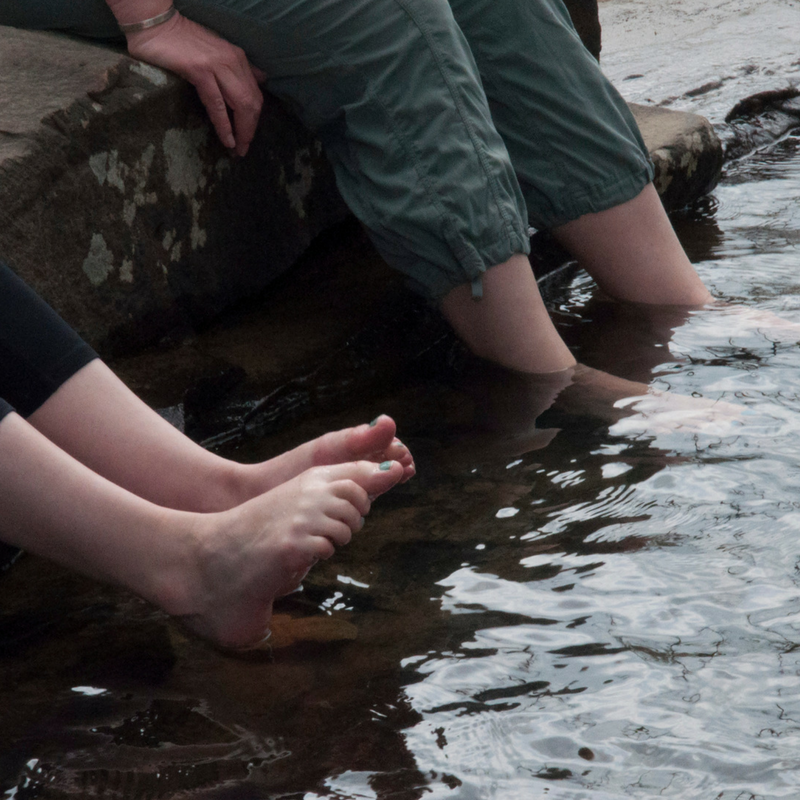 We walked in the river.

My daughter submerged her head in the cold clear water.

“I’ve just got to do this,” she said before dunking her upper torso into the freezing river water while standing knee deep as if baptising herself in the water.

There is a 12 or so mile stretch of road along the canyon with gorgeous views.

We slowly drove on the winding roads, stopping to walk around and take pictures of the scenic overlooks.

It felt very calming to sit on the large rocks beside the waterfall. You would think it would make us nervous or afraid, but it didn’t. 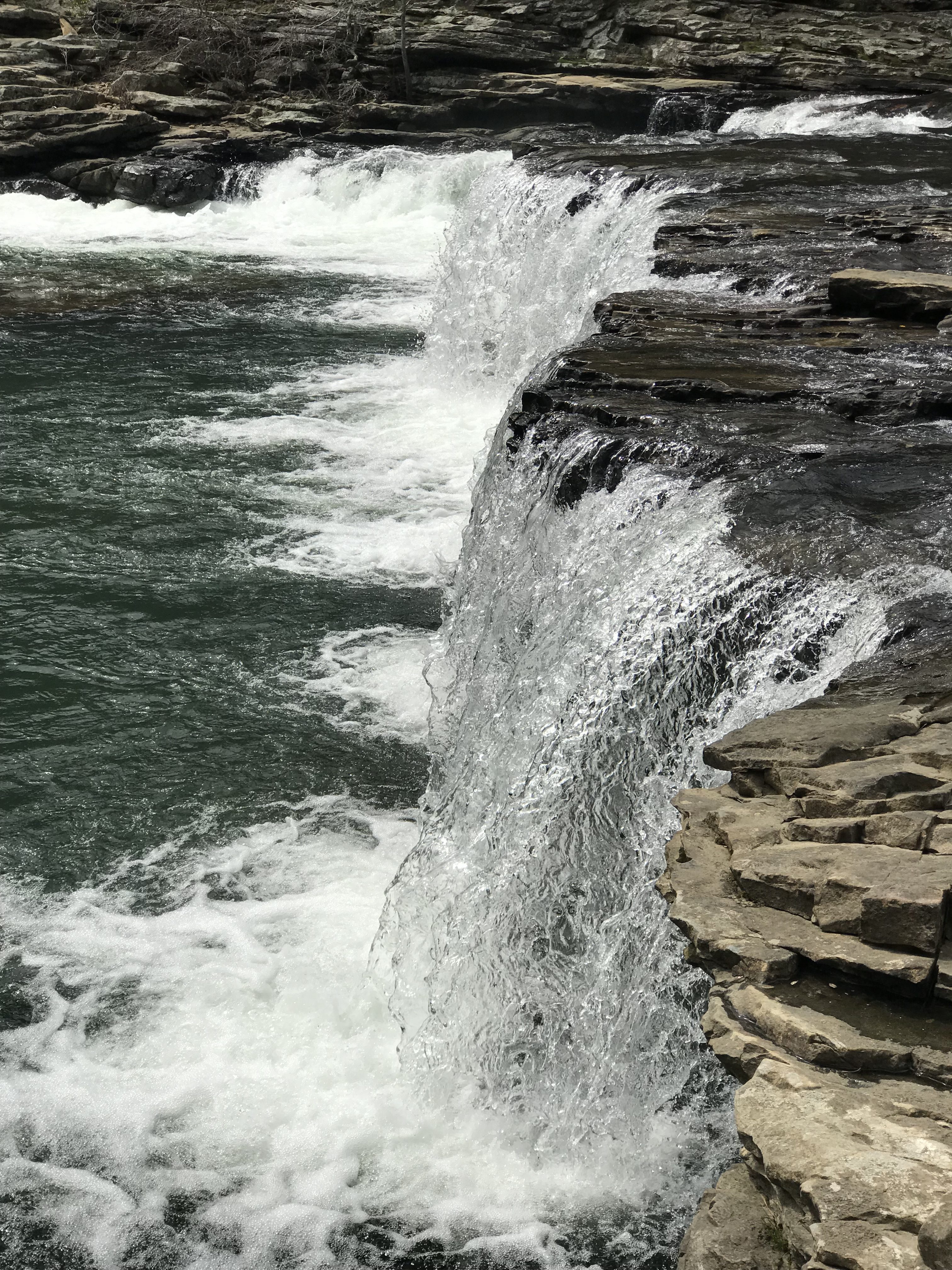 As the raging river plummeted over the falls, crashing into the large rocks forty feet below, we felt a sense of peace and a sense of happy.

We were hours and hours from home, in the mountains of Alabama, in a town we knew very little about. While viewing these large and powerful waterfalls, oddly enough, we felt grounded and safe from life’s stressors. 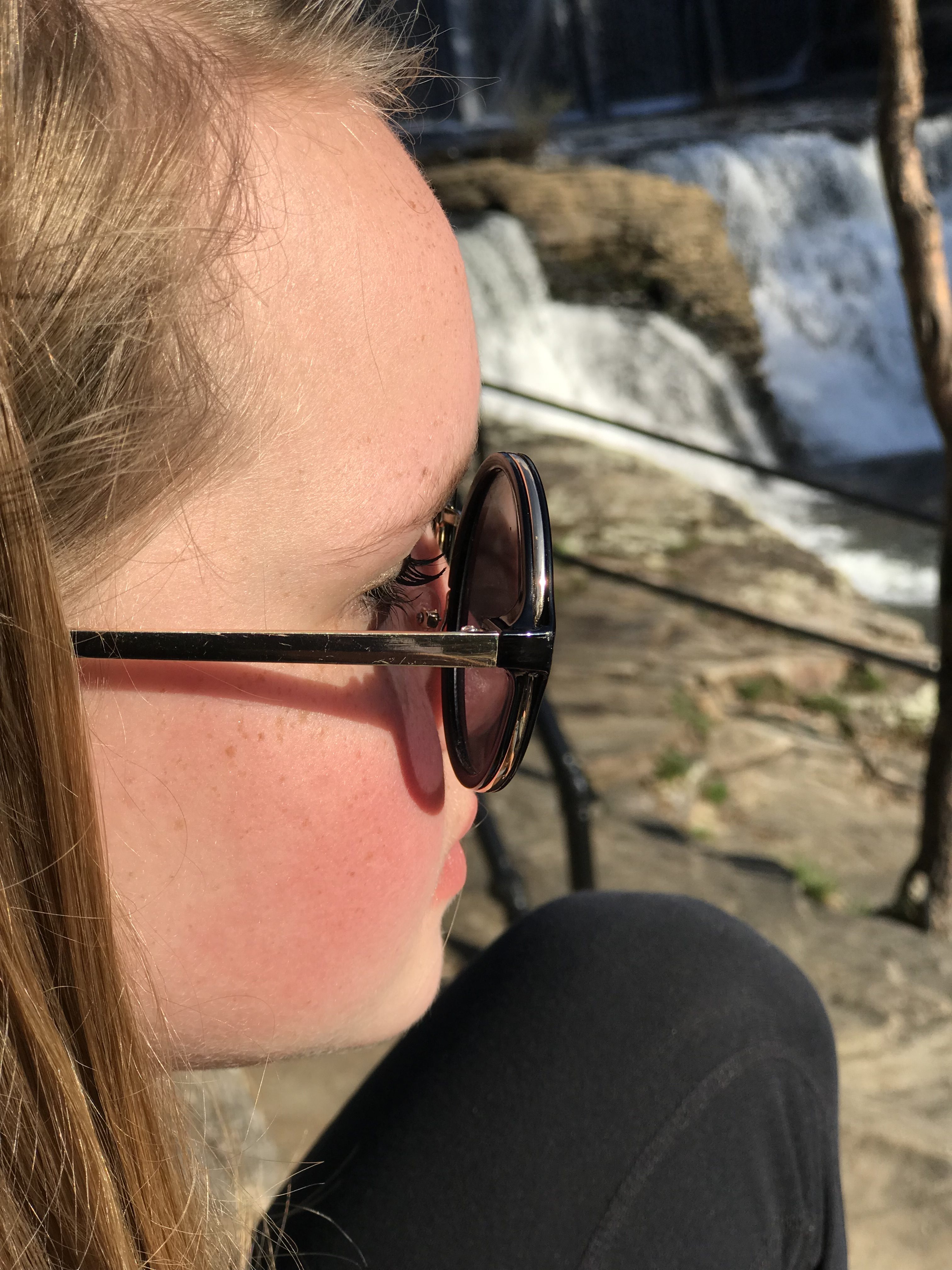 We didn’t stop there and traveled to 3 other waterfalls on our way home.

Calming your mind down isn’t about what it does physically to your body. It’s about giving you the focus to make good life decisions for that body.

For us, a calm mind allowed us to honor a promise made long ago to a tiny 7-year-old with an amazing advertisement on a sour cream lid.